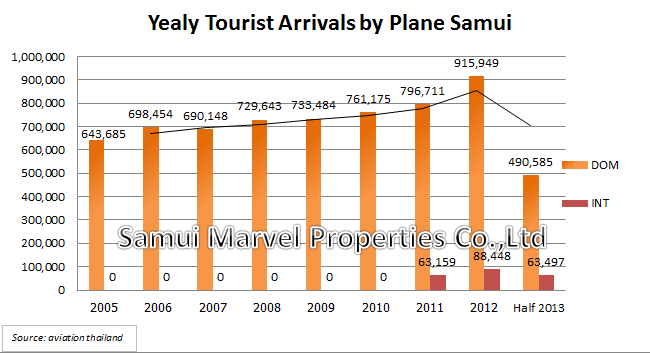 Samui presents a potent combination of positives which place it among the most desirable of tourism and residential investment destinations in Southeast Asia. It combines a natural, conveniently-located and accessible paradise with the planning and infrastructure to yield positive rewards to investors and visitors alike.

Samui is Thailand’s third largest island behind Phuket and Koh Chang. Its path of development has been more similar to that of Bali, rather than Phuket. Since the 1990s, when it was a major backpacker destination, it has followed a steady gentrification to the present where four- and five-star hotel operators such as the Conrad, W, Four Seasons, Hyatt, InterContinental, and Six Senses have entered the market.

Samui has indeed lagged behind Phuket in terms of resort development over the past decade, but that has been beneficial to the island. Samui’s stringent environmental and planning regulations have avoided the negatives of rampant development, and continued planned development and limitations on mass tourism will ensure that this remains the norm. As a result, Samui has avoided many of the environmental, infrastructure, and over-development problems that have plagued Phuket. Samui’s local government has been fortunate to appreciate the downside of rampant and unplanned development in other locations, which degrade those places’ most precious asset – the environment.

A trendy, “village” culture has developed on the island. The range of quality of cuisines served in elegant and inspiring structures far surpasses many rival locations. Samui has managed to avoid the “sex strip” syndrome associated with Pattaya and Phuket.Instead, one finds an eclectic and invigorating mix of restaurants and shops. Accordingly, mid- and upper-market Thais are attracted to Samui, creating a balance of international and domestic travelers and home owners. Samui will thus remain a destination for discerning, higher-spender visitors and investors.Samui’s airport is owned, operated, and hitherto serviced exclusively by Bangkok Airways. While this has indeed limited the number of visitors to the island, it has also allowed the sustainable development of Samui’s infrastructure and limited the island’s attractiveness as a mass market destination. Bangkok Airways has doubled the airport’s capacity and Thai Airways has commenced services to the island.

Koh Samui has tremendous potential over the next several years to cement its reputation as Thailand’s preferred, niche tropical island retreat for mid- and upper-market holiday travelers, as well as for the growing number of long-stay and permanent residents.

Ultimately, it is the sustainability and accessibility of a pristine tropical environment – in the case of Koh Samui, a lush, exotic, and graceful environment – which brings back former visitors and attracts new ones. Local authorities are sensitive to developing trends and entice development to areas capable of being built out, as well as disincentivising further development in already built up areas –as a result, the south, southwest, and southeast areas of the island are quickly becoming the natural confluence of road, traffic, and development flows, and as a result are becoming the destinations of choice for up market hotels, resorts, and villa developments.

You are now at right place for your Koh Samui real estate research.